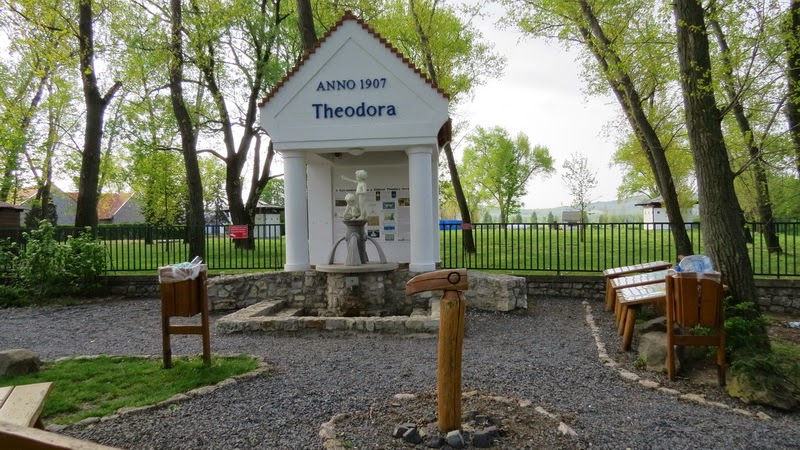 Theodora Nature Trail presents the natural values ​​of the Káli Basin, its unique water base and landscapes.
In 2006, his little brother opened: the Theodora Kékkő Nature Trail The two educational paths are linked by the Path of Time.

Theodora Educational Path and Theodora Kékkő Educational Path are linked by the so-called Path of Time, presenting in a unique way the various stages of the earth’s history. Walking along the 1,1 km long Time Path we progress on average 2 million years on every step.
The Theodora – Kékkő Nature Trail provides a glimpse of the geological and cultural history values ​​in the northwest of the Kali Basin. The starting point of the 15-station educational trail is at the Kereki Majorn, which can be reached by car and bus on the Tapolca-Zánka road. The 8 km long trail recapturing itself after the volcanic Kereki hill, with the touch of Szentbékkálla, on the imposing Szentbékkálla Kőtenger passing through. The second half of our trip continues along a wooded ridge and goes back to the vineyards, leaving the Kisfalud Temple Temple, leaving our starting point through Mindszentkáll. If you want to approach the Theodora – Kékkõ Tanokút from Kékkút, you can also go through the Theodora Educational Path. The direct link is created by a 1,1 km long, approximately straight path, with a specially crafted walking footpath which was baptized as the Path of Time. Our time passes on Earth’s 4,600-million-year history and captures some interesting events in Earth history, gaining a glimpse into the geological past.

The path of the path is shown by columns of blue pebbles and “bugs”. On each of the information boards you can read a simple question about the next stop, and then follow the correctness of our responses.

1. Kereki farm
2. Kerekikál
3. Round Hill
4. Layout of the Kali Basin
5. Secrets of Depth
6. In the middle of the sacred valley
7. Stone Rock of Szentbékkálla (formation)
8. Stone Bridge of the Holy Rock (life between stones)
9. Stone Bridge of Szentbékkálla (Formal Elements)
10. Robbing of rocks
An abandoned quarry
12. Fired volcano near Mindszentkala
13. Kisfalud, grape and wine production
14. Use of stone in folk architecture
15. “Land of Africa” ​​in the Kali Basin